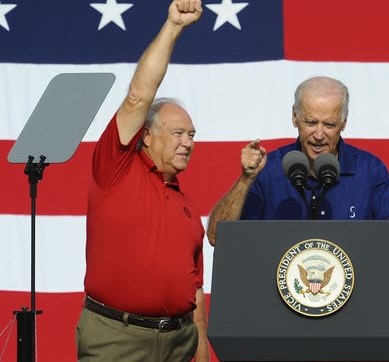 DETROIT, MI – National Right to Work Foundation President Mark Mix sent a letter to US Attorney for the Eastern District of Michigan Matthew Schneider, on the eve of a recent meeting between Schneider and current United Auto Workers (UAW) union President Rory Gamble. Mix urged Schneider to advance worker-empowering reforms for the corruption-ridden UAW during the meeting, which was scheduled to discuss the union’s future after a massive embezzlement and racketeering scandal that continues to unfold.

The investigation has yielded the convictions of at least 14 people, including at least 11 affiliated with the UAW. Gary Jones, who was UAW President up until last fall, pled guilty to embezzling more than $1.5 million. His last official act as head of the union was to cast the tie-breaking vote to put himself on paid leave and elevate long-time ally Gamble to top boss. Earlier this year, The Detroit News reported that Gamble was also the subject of the investigation and suspected of taking kickbacks or bribes from a vendor in exchange for lucrative contracts with the union.

While a full federal takeover of the union has been proposed by federal law enforcement officials, UAW honchos appear to be hoping that a potential Joe Biden presidency will let them avoid such a fate. The UAW hierarchy in April officially endorsed Biden, who has promised to massively increase union bosses’ power over workers nationwide if elected.

In the letter, Mix points out that coercive privileges granted to the UAW by federal law created an environment in which UAW officials could all too easily take advantage of workers.

“UAW union officials have perpetrated this abuse using the extraordinary powers granted to them by federal law,” specifically “their dual coercive powers of monopoly exclusive representation and authorization to cut deals mandating that rank-and-file workers pay union dues or fees, or else be fired,” Mix wrote.

The reforms Mix urged are designed to “squarely address” this coercive control that union officials have over rank-and-file workers. They include “impos[ing] an immediate recertification vote for every union local touched by the corruption,” “empower[ing] workers as individuals to fight corruption through refusing to fund the UAW,” and “impos[ing] with providing full transparency to rank-and-file workers of all union financial transactions.”

Mix concluded by pressing Schneider to “try some new ideas” that focus on empowering the workers “whose trust and money has been systematically stolen” in light of past fixes that have not deterred other union bosses from abusing their power.

If, as UAW brass hope, Biden is elected president, all worker victims of the UAW corruption could be forced to once again pay money to the union or else be fired. In 27 states, including Michigan where the UAW is headquartered, Right to Work laws ensure that no worker can be fired for refusing to tender dues or fees to a union hierarchy as a condition of employment. Biden has promised to ban these laws if elected.

“The revelations of greed and shamelessness that continue to arise in the UAW probe are no surprise to anyone who is familiar with the coercive privileges granted union bosses by federal law,” commented National Right to Work Foundation President Mark Mix. “Though we urge Mr. Schneider to push the reforms detailed in our letter which will put the power to hold union officials accountable in workers’ hands, there is ultimately no place in federal law for provisions that force workers to pay union bosses to keep or get a job.”

Mix continued: “Joe Biden and other forced-dues proponents ought to explain why they believe tens of thousands of workers in non-Right to Work states should have been fired had they sought to cut off the forced dues being paid to Gary Jones’ corrupt UAW.”