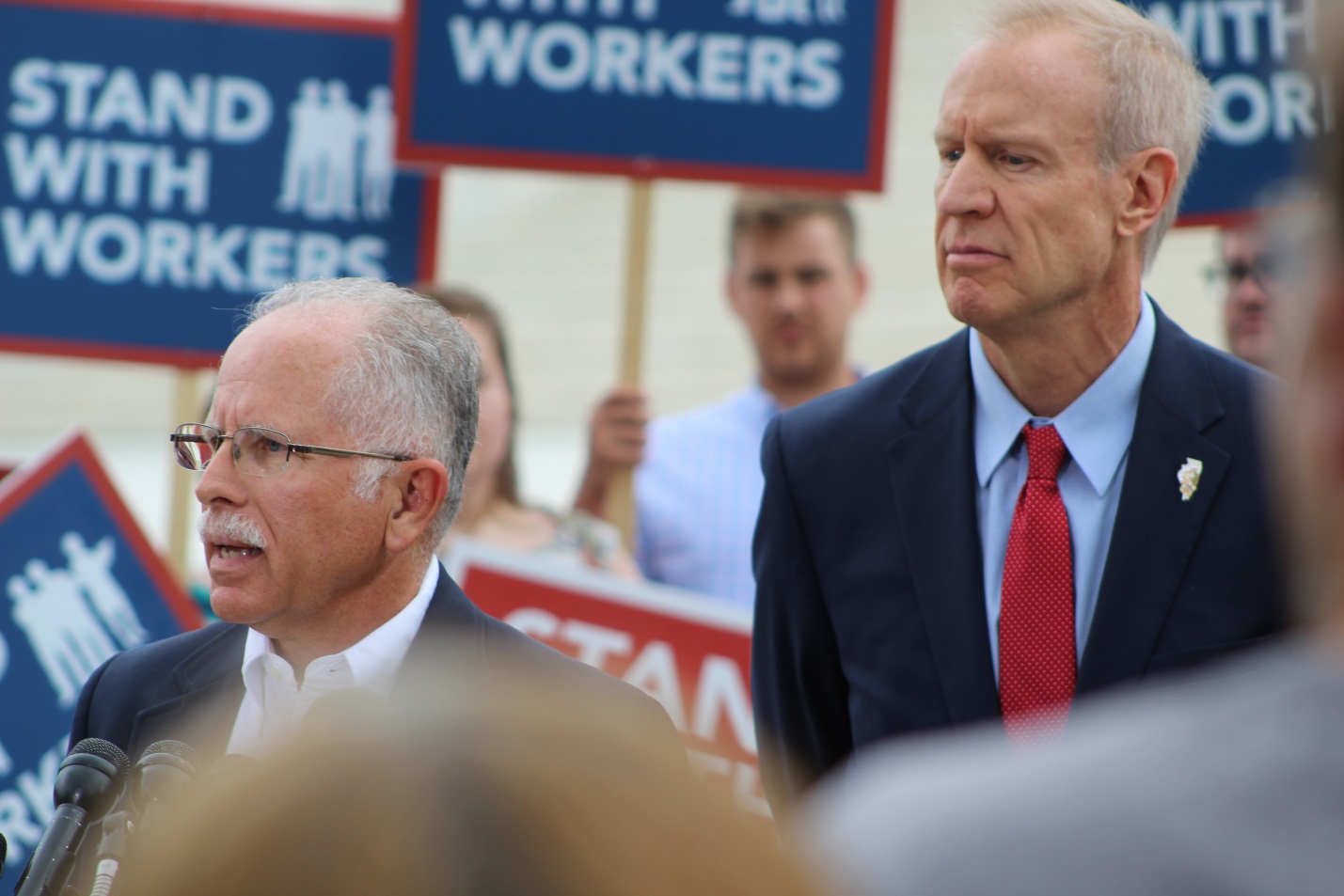 Plaintiff Mark Janus discussed his victory on the steps of the U.S. Supreme Court, alongside Illinois Governor Bruce Rauner, whose lawsuit initiated the case in which Janus intervened with Foundation free legal aid.

Washington, DC – On June 27, 2018, the U.S. Supreme Court ruled in Janus v. AFSCME that nonunion government workers cannot be required to pay union fees as a condition of working in public service. This landmark case restores the First Amendment rights of free speech and freedom of association to more than 5 million public school teachers, first responders, and other government workers across the country.

“I’m thrilled that the Supreme Court has restored not only my First Amendment rights, but the rights of millions of other government workers across the country,” said Mark Janus, plaintiff in the case and a child support specialist for state government in Illinois. “Across the country, so many of us have been forced to pay for political speech and policy positions with which we disagree, just so we can keep our jobs.”

Illinois is among 22 states that have required many government workers to pay union fees as a condition of employment. Janus has worked for state government in Illinois as a child support specialist since 2007.

Over the past decade, he was forced to pay thousands of dollars in union fees to the American Federation of State, County and Municipal Employees (AFSCME) – even though he opposes many of the union’s positions on public policy issues, felt he would be better off without the union’s so-called representation, and was never asked if he wanted to be covered by a union contract.

Now that the Supreme Court has ruled in his favor, Janus will not be required to pay these union fees.

“Under Illinois law, public employees are forced to subsidize a union, even if they choose not to join and strongly object to the positions the union takes in collective bargaining and related activities,” wrote Justice Samuel Alito in the Supreme Court’s opinion. “We conclude that this arrangement violates the free speech rights of nonmembers by compelling them to subsidize private speech on matters of substantial public concern.

The Supreme Court’s opinion further holds that the opt-out schemes that union bosses use to trap workers into paying dues without consent are unconstitutional. In their briefs for Janus, Foundation staff attorneys had asked the Court to settle that important issue.

Justice Alito wrote in his opinion for the Court that charging nonmembers union fees violates the First Amendment “unless employees clearly and affirmatively consent before any money is taken from them.”

The day after Janus was issued, the Court vacated the decision of the U.S. Court of Appeals for the Seventh Circuit in another Foundation-supported case, Riffey v. Rauner, for reconsideration in light of Janus. The Seventh Circuit had ruled that SEIU officials seizing nonmember in-home care providers’ money without their consent did not violate their First Amendment rights unless providers could prove that they affirmatively objected to the seizure.

Now, thanks to the Janus victory, the providers can continue their case seeking a return of the $32 million in union fees unconstitutionally seized by the SEIU.

Fight for Freedom from Compulsory Unionism Far from Over

“This victory represents a massive step forward in the fight to protect American workers from forced unionism, but that fight is far from over,” said Mark Mix, president of the National Right to Work Legal Defense Foundation. “Union officials and their allies in state governments have already taken steps to prevent workers from exercising their rights under the Janus decision, while millions of private sector workers in states without Right to Work protections are still forced to pay union fees or else be fired.”

“Further,” continued Mix, “workers of all stripes continue to have their freedoms of association violated by being forced under union monopoly ‘representation’ against their will. So while we celebrate today’s decision, there remains much work to do to both enforce and expand upon this historic victory over coercive unionism.”

A Supreme Court victory is only the beginning of the fight to ensure protections for independent-minded public sector workers against forced union fees. That’s why the National Right to Work Legal Defense Foundation has created a task force to enforce the new precedent set in Janus v. AFSCME, defending the rights of government employees and standing up to union bosses who attempt to circumvent and undermine the new protections.

The Foundation is offering free legal aid to all government workers who wish to refrain from union membership and union payments. The Foundation’s 20 staff attorneys defend workers’ rights in more than 200 cases each year, all at no cost to the employees aided.

The National Right to Work Foundation has also established a stand-alone website to assist workers in learning their rights and providing guidance on how to exercise them. That site, MyJanusRights.org, directs workers to the Foundation’s legal aid program for free assistance in exercising their First Amendment rights protected by the Janus decision.

“The victory in Janus means that public-sector workers can no longer be forced to pay dues or fees to union officials to keep their jobs,” said Mix. “Unfortunately, experience shows us that union officials frequently ignore restrictions on their power over workers, which is why we are establishing this task force to assist workers who want to enforce their new Janus rights.”

Any public sector worker who has questions about his or her rights, or encounters any resistance or abuse while trying to exercise his or her workplace rights, is encouraged to contact Foundation staff attorneys for free legal aid.