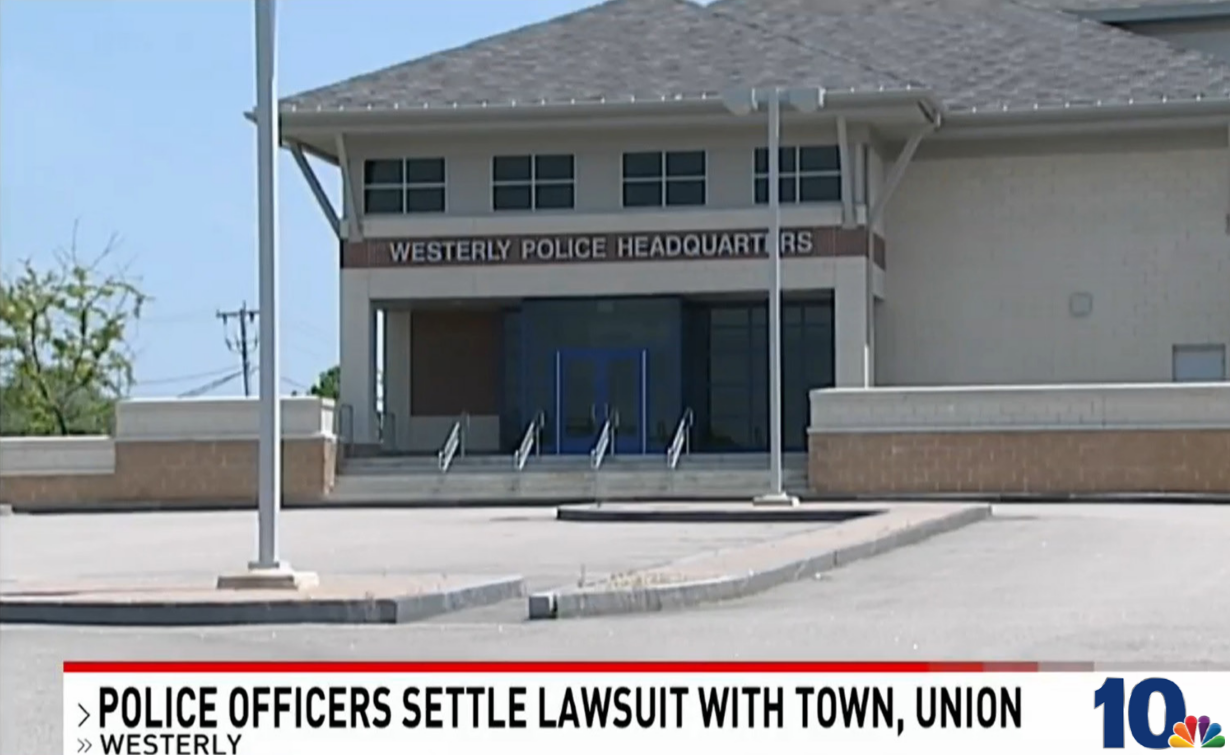 IBPO union bosses and Town of Westerly officials thought they could get away with seizing $5 per hour illegally from five non-union officers. As the result of Foundation-won settlements, all five officers have now had their rights vindicated.

The lawsuits were filed with free legal aid from the National Right to Work Legal Defense Foundation and the Rhode Island-based Stephen Hopkins Center for Civil Rights. Under the settlements, IBPO and the Town of Westerly agreed to pay almost $65,000 in refunds of union fees seized from the officers through the illegal scheme and compensation for the officers’ other claims. Officers Koza and Ferrigno will also be reinstated as police officers and receive nearly $48,000 in back pay from the Town for the period after they were terminated.

“The Foundation is proud to stand with Officers Ferrigno, Koza, Morrone, Falcone, Cimalore, and all public servants who are targeted with intimidation, misinformation, threats of firing, and other illegal tactics simply to keep dues money flowing into the bank accounts of self-interested union officials,” commented National Right to Work President Mark Mix.

According to the lawsuits, IBPO bosses and the Town of Westerly began seizing $5 per hour from each of the five officers’ hourly pay without authorization in April 2014. IBPO and the Town perpetrated this scheme against the officers even though they were classified as “nonpermanent police officers” outside the so-called “representation” of union bosses.

Over the next six months, in an attempt to stop the flow of illegal fees in this “backroom deal,” the officers repeatedly sought meetings with Town officials, including the Town of Westerly’s payroll department, the Westerly Chief of Police, the Town Manager and the Town Council, only to be rebuffed. According to the lawsuit, the Chief of Police warned the officers they could be “easily replaced” if they sought publicity for their cause.

The Reserve Officers finally managed to present their objections to the Town Council, but it refused to stop the compulsory fees. On October 20, 2014, within a week of hearing that the Reserve Officers arranged a meeting with the Town Council to argue their objections to the forced-fee scheme, the chief emailed the Town Manager informing her of his plan to terminate Koza and downgrade reserve officers’ priority level for taking on new traffic detail assignments. The five officers contended that this limited the hours they could work and the pay they could earn.

Records disclosed during the litigation revealed that during a November 2014 meeting between the Town Council and other town and union officials to discuss the potential of litigation in this situation, one official opined, “It’s going to cost thousands and thousands of dollars . . . They’d have to take this money out of their pockets. I don’t think [their attorney] is going to represent them for free.” Another official at the time asserted, “If we say no, they’re probably going to back down.” When the officials considered whether the Reserve Officers would keep working for the Town, one council member commented, “They can always go to McDonald’s.”

In December 2014, the Town fired Koza, who had never been disciplined by the Town before these events. According to Koza’s lawsuit, the Town attempted to justify his termination on the grounds that he had not immediately left his position directing traffic in a busy intersection to move his police cruiser for an officer attempting to drive through a restricted lane. The Town also cited Koza’s calling himself a “police officer” rather than a “reserve police officer” in his application for a handgun carry permit. Koza’s lawsuit points out that the Town’s charter then gave “nonpermanent police officers” like Koza the powers of regular police officers while on duty, and all of Koza’s references in his application called him a “reserve officer,” “reserve police officer,” and “reserve officer with the Westerly Police Department.”

The Town fired Ferrigno in May 2016. According to Ferrigno’s lawsuit, the Town alleged that he left a bicycle race detail assignment early. But Ferrigno contended that he actually stayed five minutes later than he was instructed to by his supervisor while waiting for his replacement to arrive. As further evidence that his firing was unconstitutional retaliation, Ferrigno’s lawsuit also noted that the officer who arrived late to relieve him was a union official, who was never even disciplined for his lateness.

The five filed a lawsuit in the United States District Court for the District of Rhode Island, arguing that IBPO and Town of Westerly officials had violated their First Amendment rights by forcing them to financially support the union when they were outside its contract. The officers’ lawsuit also alleged that Town officials seized union dues without their individual written authorization in violation of Rhode Island’s wage deduction laws. The lawsuit additionally charged that the town retaliated against them when they spoke out publicly about the malfeasance.

Officers Koza and Ferrigno filed their own complaints in the same court, charging the Town with firing them for exercising their First Amendment rights. All the lawsuits also sought punitive damages. Ultimately, rather than face the officers and their attorneys at trial, Town and Union officials agreed to settle the cases. The settlements order union officials to compensate the officers almost $20,000 and Town officials to pay $45,000 for dues that were seized illegally under the “$5 per hour” policy and for other damages and claims. The settlements in Koza’s and Ferrigno’s cases, on top of requiring the Town to reinstate the two officers and pay back wages, require that all references related to the discipline forming the basis of their lawsuits be removed from their personnel records.

The U.S. District Court for the District of Rhode Island later entered a consent judgment in the case which forbids IBPO Local 503 from forcing any constable or reserve officer to pay union dues or fees without his or her affirmative consent.

“The Town and the IBPO could have avoided the years and expense of litigation if they had only listened in 2014 when we first tried to tell them that they cannot just take $5 per hour from our pay and give it to the Union without our permission,” Officer Cimalore said. “After unsuccessfully trying more than a year to resolve the matter, we were forced to go to federal court.”