Union must back down after trying to punish worker who left union, found new job 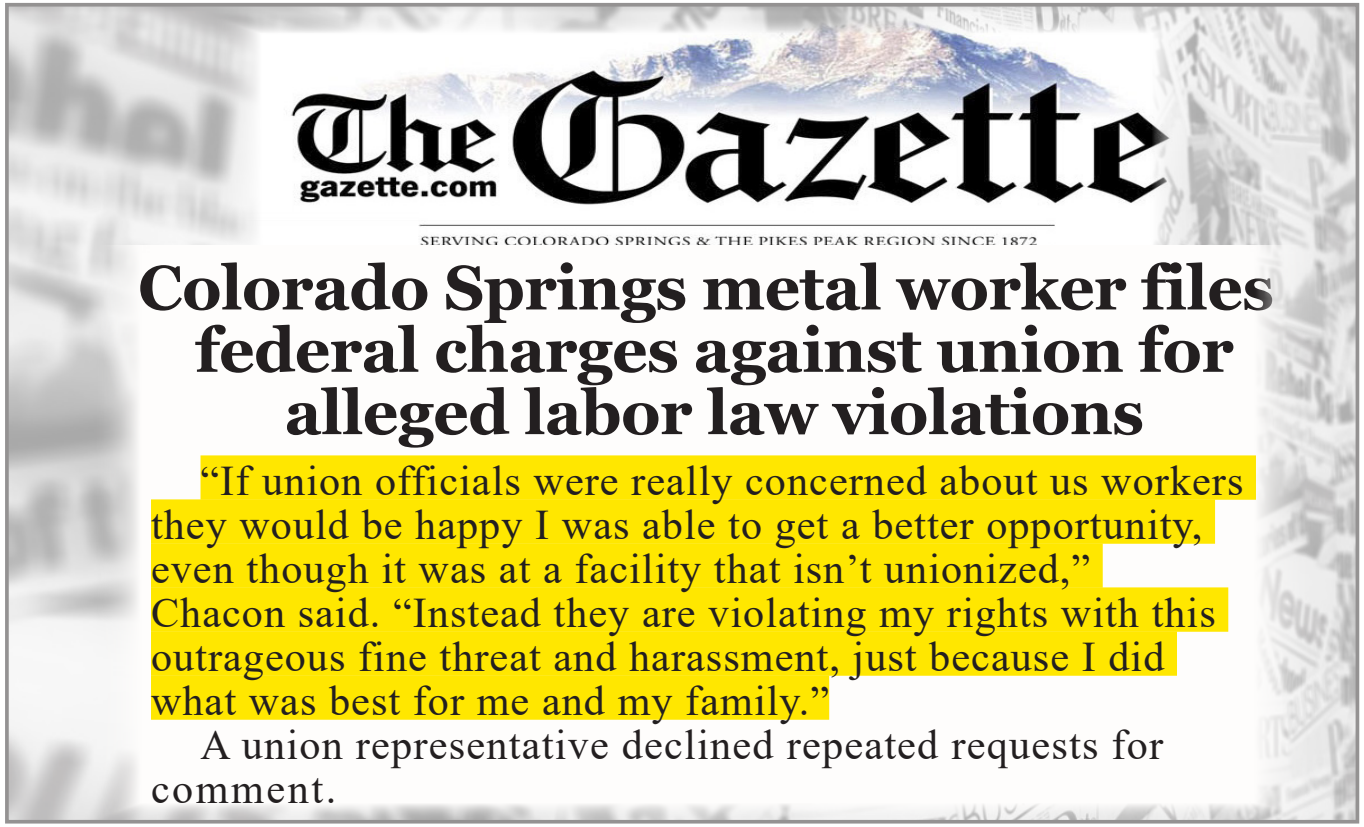 COLORADO SPRINGS, CO – Colorado metal worker Russell Chacon was angry when he received a letter from International Association of Sheet Metal, Air, Rail, and Transportation Workers (SMART) Local 9 union officials in May, demanding he pay $21,252 in disciplinary fines. Six months earlier he had resigned his union membership, and had left his job at Colorado Sheet Metal to work for Rocky Mechanical, an employer that isn’t under the control of Sheet Metal union bosses.

Union officials demanded Chacon fork over the ruinous sum to cover an alleged union “loss of funds” for a period through May 31, which included days that Chacon had not even worked yet.

Chacon obtained free legal representation from National Right to Work Foundation staff attorneys and filed federal unfair labor practice charges against the Sheet Metal union at National Labor Relations Board (NLRB) Region 27 in Denver. He asserted that the fines were levied against him specifically in retaliation for his leaving the union and finding new work.

Soon after the Foundation-assisted charges, Sheet Metal union officials dropped the illegal fine demands, and are now forced by a settlement to inform workers that they will not subject them to internal union discipline if they exercise their right to end union membership.

Decades-old federal law prohibits union officials from forcing internal union discipline on workers who have resigned union membership, and from restricting the exercise of that basic right to refrain.

“If union officials were really concerned about us workers they would be happy I was able to get a better opportunity, even though it was at a facility that isn’t unionized,” Chacon told the Colorado Springs Gazette in May. “Instead they are violating my rights with this outrageous fine threat and harassment, just because I did what was best for me and my family.”

Although Sheet Metal union bosses informally rescinded their fine demands soon after Chacon filed his charge, NLRB Region 27 continued to investigate Chacon’s charge that union officials had instigated the discipline specifically in retaliation for his leaving the union.

The NLRB found merit in Chacon’s claims of retaliation in July, forcing union officials to settle in order to avoid NLRB prosecution.

The settlement requires Sheet Metal union officials to post a notice at the union office stating that they “will not fail to inform or misinform you about the proper process for resigning your membership,” “will not fail to give effect to resignations of membership from the Union,” and “will not restrain and coerce you by instituting and prosecuting disciplinary proceedings and levying fines after failing to give effect to resignations.” The notice also confirms that Chacon is no longer subject to the fine demands.

“As the conclusion of this case shows, Sheet Metal union officials were caught red-handed violating workers’ most basic right to refrain from associating with an organization to which they don’t want to belong,” commented National Right to Work Foundation Vice President and Legal Director Raymond LaJeunesse. “Although we are pleased that Mr. Chacon is no longer saddled with an outrageous fine demand, unfortunately other Colorado workers can still be forced to pay dues to union bosses because The Centennial State lacks a Right to Work law.”

LaJeunesse continued, “Right to Work protections ensure that all union financial support is strictly voluntary, and that no worker can be fired just for refusal to pay dues to unwanted union bosses.”

Posted on Dec 4, 2021 in Newsletter Articles