The National Taxpayers Union’s blog (they’re a voluntary “union”) picks up on a Senate vote today to repeal Davis-Bacon wage mandates for bridges classified as “structurally deficient” or “functionally obsolete.”

Like “Project Labor Agreements,” Davis-Bacon effectively discriminates against nonunion workers and contractors, effectively blackballing them from working on government projects.

Not surprisingly, Big Labor’s allies in the Senate blocked the amendment that would have eliminated the onerous David-Bacon requirements… meaning that taxpayer dollars will continue to be diverted into bridge construction projects under union boss monopoly control.

The resulting featherbedding, extortionate work stoppages, and wasteful work rules will run up the costs. Meanwhile, union officials will rake in millions in forced union dues.

But that isn’t where the story ends. This map shows the Percentage of Bridges in each State that is classified as “Functionally Obsolete” or “Structurally Unsound” (the same classifications used in the blocked Senate Amendment):

It turns out that bridges in Right to Work States are far safer than those in states that allow union officials to force workers to pay union dues or be fired.

In fact bridges are 31% more likely to be functionally obsolete or structurally unsound in forced-unionism states (29.68% in Forced-Unionism States vs. 22.71% in Right to Work States).

However, as noted on Labor Day, the window of opportunity for the Bush NLRB to undo the damgage to employee freedom done by the agency during the Clinton years is closing quickly.

When it comes time for union officials to corral employees into forced dues-paying ranks, they are increasingly using coercive "card check" organizing schemes.

Just like that, the SEIU-UHW union gained monopoly bargaining privileges. But union officials and Kaiser could not prove that the union had actual support of a majority of employees. In fact, in a memo that Kaiser Permanente sent to its employees, they even admit that the company did not know how many employees were in the bargaining unit, yet claimed there was majority support for unionization anyway, and was prepared to enter into negotiations with union officials.

Previously, Lisa and three of her coworkers filed federal charges against the union and their employer for manipulating the size of the bargaining unit in order to obtain a majority. Despite requests, union officials were unable to disclose the names of the employees who were eligible to participate in the drive and couldn’t indicate which employees were inside or outside the alleged bargaining unit.

The National Labor Relations Board agreed to investigate and issue a complaint, but within two weeks of that announcement, SEIU-UHW and Kaiser suspiciously abandoned the card count. Having filed follow-up charges, Lisa and her coworkers are currently awaiting an outcome to the board’s investigation.

You can read about several other employees like Karen Mayhew and Mike Ivey who fought back against "card check" organizing schemes with help from the National Right to Work Foundation.

Right to Work Laws are an Economic Boon

His outrageous claims including "Right to Work laws harms workers" and "the economically damaging effect of ‘right to work’ laws is well documented" are completely bogus.

In fact, Mechanic’s perversion of the Bureau of Labor Statistics’ data is misleading. According to the National Institute for Labor Relations Research (NILRR), since 2001, Right to Work states lead in job growth 5-to-1. Between 2001 and 2005, real personal income growth increased 37% in Right to Work states. Comparatively, forced-unionism states had a real personal income percentage growth of only 26%, below the national average of 31% growth.

There’s no doubt that Right to Work laws are an economic boon. In fact, a recent special on CNBC television shows that Florida was ranked the 8th best state in which to do business overall. And, the top six states to do business were all long time Right to Work states.

But aside from providing economic prosperity, Right to Work laws give employees the freedom to choose. Florida’s Right to Work law, on the books since 1944, ensures Floridians’ long and proud tradition of supporting freedom of choice when it comes to union membership.

Governor Charlie Crist couldn’t have put it better when he said Florida’s Right to Work law provides "greater freedom" for his fellow citizens.

Of course, the UAW International union officials aren’t actually making anything. Rather by “union-made” they mean that the rank-and-file workers who make the cars are forced to affiliate with the union and those in non-Right to Work states are forced to pay dues.

For many, such a list has the opposite effect, as nearly 80 percent of Americans oppose the injustice of forced union dues and compulsory unionism.

So for those who want to support American workers who are not forced to affiliate with or pay dues to a union, here is a list of cars assembled at compulsory unionism-free auto plants here in America:*

*Note: Determining the suppliers of parts of every car is very difficult. The above list is of cars assembled at facilities where our research indicates that a union does not have a monopoly bargaining power over individual employees. If you want to ensure that the parts of your car are not produced by employees forced to affiliate with a union, we encourage you to do your own research and let us know your results.

Following up on Patrick’s post from yesterday, the testimony in this video details just a few types of bullying workers often endure under coercive "card check" unionization drives. This is the story of Freightliner employee Mike Ivey of Gaffney, SC.

Thirty years ago, legendary union organizer Cesar Chavez and the United Farm Workers made history by winning the right to a secret ballot for migrant field hands in California who wanted to join a union. Today, in an odd twist, the UFW is trying to take that right away.

The article echoes a 2001 letter written by George Miller (D-CA) and a group of other Congressmen urging Mexico to adopt the secret ballot for its unionization elections. In it Miller wrote:

[W]e feel that the secret ballot election is absolutely necessary in order to ensure that workers are not intimidated into voting for a union they might not otherwise choose.

Now Miller is the sponsor and lead advocate of Big Labor’s “card check” bill that would eliminate the secret ballot election for unionization here in America.

Sure the hypocrisy is overwhelming, but upon further review it is not so surprising.

Unions were granted powers under the National Labor Relations Act (NLRA) that remain unparalleled for a private organization. Among other unique special legal privileges, unions can forcibly represent people and then force those already coerced workers to pay, under threat of termination, for the unwanted “representation.”

Back when the New Deal-era NLRA passed, unions shrouded their extraordinary powers over individual workers with a secret ballot election in attempt to legitimize their ability to coerce employees.

Now, having used the forced dues collected with their extraordinary powers to amass the political influence necessary, union officials are scrapping the secret ballot altogether in an effort to further expand their power to coerce individual employees.

It’s a move Tony Soprano would be proud of.

The Camel’s Nose Under the Tent

This 1977 article from the Right to Work archives underscores that union officials have long sought to establish beachheads for seizing forced dues in Right to Work states by simply dubbing certain land a "federal enclave." So it seems, the latest battle in Texas is nothing new.

In also noting that compulsory unionism abuse cuts across every cross section of America, the article notes:

"…this is everybody’s fight, whether they realize it or not, or fight it or not." 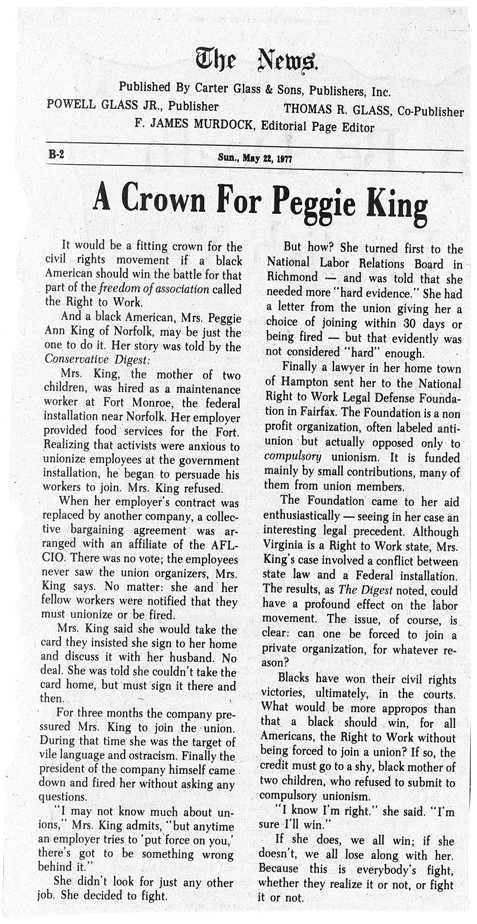 Mark Turek of Unfairshare.org, a grassroots citizens’ group in Maine opposed to compulsory union dues for State employees, became the latest in a line of employees to quit in protest. Turek resigned Labor Day Monday, blasting the compulsion that he feels has poisoned his workplace.

"There are so many inappropriate things happening within Maine State Government, I am no longer able to work in that environment," stated Turek. Vowing to persevere despite leaving his job, he continued, "Our general taxpayers and the hard-working state employees all deserve a better system, and I sincerely hope that happens some day. Happy Labor Day!"

How many more employees have to jump ship before the powers that be in Maine ditch forcing workers to pay dues’ Bravo to those employees that have stood fast in the face of this continuing injustice.

The Foundation’s ongoing effort to prevent erosion of the 40-year-old Texas Right to Work law widened today with yet another worker named Ramona Trevino standing up to forced union dues.

If you haven’t yet, take a look at the inspiring story of Juan Vielma, a brave Texan who stood firm on principle against forced union dues in the face of immense pressure. Refusing to cave, Juan told his home town newspaper, "I work to get paid, I don’t pay to work."

Couldn’t have put it better.