How union organizers mislead workers into signing away their rights

Once a union targets a workplace for unionization, union officials begin a campaign to collect "authorization cards" from workers. Traditionally, once signatures from 30 percent of the workers are certified by the National Labor Relations Board, the NLRB conducts a secret ballot election to determine if there is majority support for a union.

Union lawyers have carefully created cards that appear to only request a secret ballot election, but that actually count as a vote for the union. Workers often sign the cards to "get the union off their backs’ (as the AFL-CIO has admitted), believing that they will be able to vote against the union in secret. However, the fine print actually authorizes the union to represent workers and impose unionization without an election.

This is an example of an actual "authorization card" used by the Teamsters union: 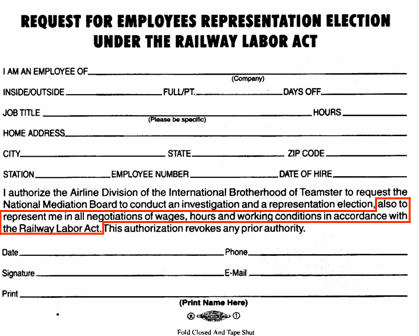 While the headline presents the card as a "Request for Employees Representation Election" the fine print (outlined in red) states that by signing the card the employee authorizes the Teamsters to seize monopoly bargaining power over the employee.

For more on card check visit the Foundation’s Spotlight on Top Down Organizing.

Employees should see this page for information about their rights if a union is conducting a card check campaign at their workplace.

Employees: Download our informational poster to inform your co-workers about this tactic.