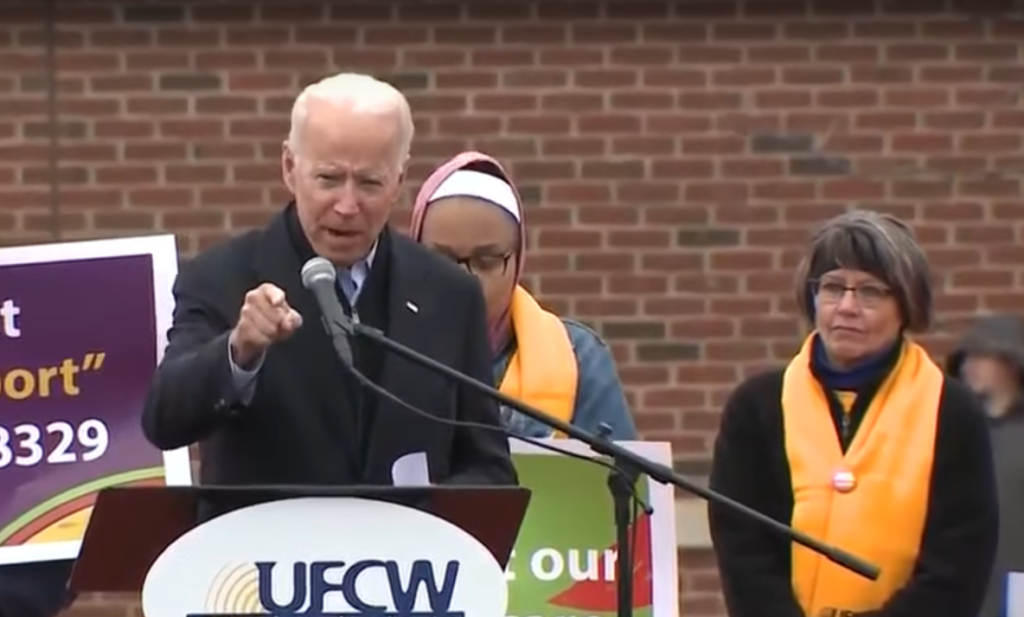 Ardent forced dues-supporter and former Vice President Joe Biden joined with UFCW bosses on the picket lines during the Stop & Shop strike, even as UFCW officials were violating the rights of rank-and-file workers.

NORTHAMPTON, MA – Stop & Shop employee Matthew Coffey, one of thousands across New England who were ordered to strike by United Food and Commercial Workers (UFCW) union bosses in April, has filed two unfair labor practice charges against the union for violating his rights before, during and after the strike.

Coffey charges that UFCW officials lied to him about union membership requirements at the beginning of his tenure with Stop & Shop, misinformed him about his right to continue working during the strike, targeted him with personal slurs when he did decide to keep working and finally tried to illegally discipline him once the strike concluded.

According to his first charge, union officials led Coffey to believe that Stop & Shop is a “closed shop.” As a result, he joined the UFCW when hired in 2017, under the impression that union membership was required to keep his job.

It wasn’t until the April strike that he discovered “closed shops” are illegal under federal law and he had the legal right to refrain from formal union membership.

With this new knowledge, he returned to work and filed his first charge against UFCW Local 1459 with free legal aid from National Right to Work Foundation staff attorneys. That charge detailed union lies about his right to refrain from union membership and resign before the strike.

It also detailed harassment he endured, including personal slurs, because he exercised his right to work during the strike.

After the strike ended, UFCW officials weren’t finished with Coffey. Union agents mailed him a letter, threatening to discipline him for disobeying the strike order and demanding that Coffey appear before a union kangaroo court to defend himself.

“Unfortunately, this is not an uncommon story. Union boss-ordered strikes are frequently rife with intimidation and violations of workers’ rights, and the Foundation plays a major role in ensuring workers subjected to such malfeasance have a voice.”