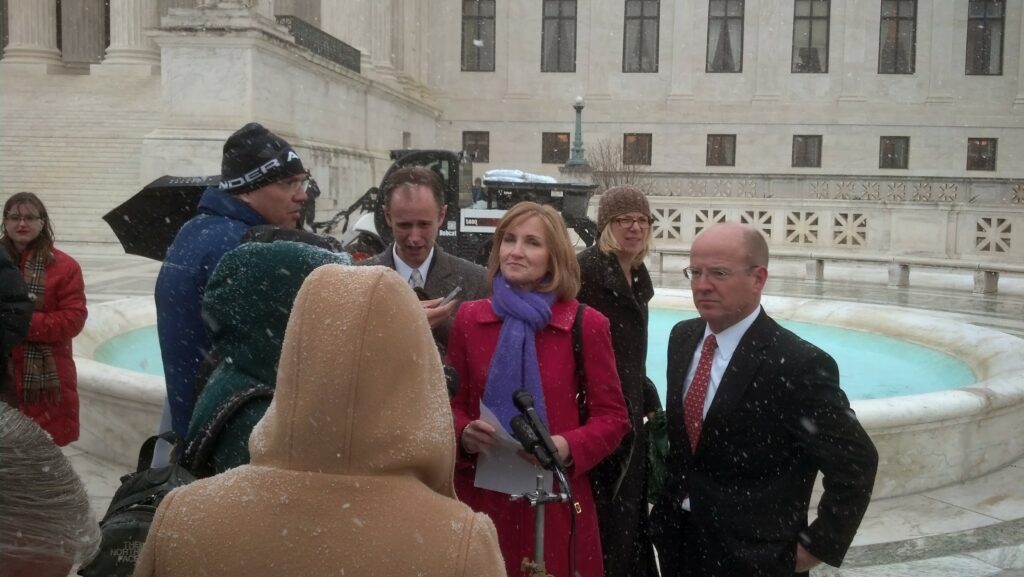 In the 2014 Harris case, the U.S. Supreme Court prohibited union officials from requiring the diversion of Medicaid payments from providers like Susie Watts (center), pictured at the High Court with her Foundation attorney William Messenger (left) and Foundation President Mark Mix (right).

WASHINGTON, D.C. – Spurred by National Right to Work Foundation supporters, the Department of Health and Human Services (HHS) issued a final rule in May, making it clear that the diversion of Medicaid payments from home healthcare providers to union bosses violates federal Medicaid law.

This Foundation-backed rule change closes an illegal loop-hole created by the Obama Administration to provide union officials with legal cover to siphon hundreds of millions of dollars in Medicaid funds into union political and lobbying activities.

As a giveaway to the Obama Administration’s political backers, in 2014, the Obama HHS created a regulation to give legal cover to ongoing schemes by the SEIU and other unions that siphoned off over $1 billion in Medicaid funds.

However, the Medicaid law was clear that taxpayer-funded Medicaid money must go directly to healthcare providers, many of whom care for their own family members in their own homes, and cannot be diverted to third parties. The Obama rule was issued as Foundation staff attorneys were shining the spotlight on the illegal scheme in federal court.

The 2014 Foundation-won U.S. Supreme Court Harris v. Quinn decision held it is unconstitutional for states to force homecare providers paid through Medicaid programs to pay union fees. In Harris, the Court ruled that a scheme imposed by the State of Illinois, in which more than 80,000 individual homecare providers were forced to pay union fees out of the state funding they receive, violated the providers’ First Amendment rights.

Rather than fold up the scheme as a result of the Supreme Court ruling, Obama operatives chose to skirt the law.

The Obama Administration helped Big Labor continue to skim over $100 million per year from healthcare providers by authorizing states to “assign” a portion of providers’ funds directly to union officials.

“The Harris decision, won by the Foundation in 2014, made it illegal for states to require these providers to pay fees to union officials,” said National Right to Work Vice President Patrick Semmens. “But with the help of the Obama Administration, union bosses attempted to undermine that ruling by scheming to continue deducting union dues from Medicaid payments, even from providers who never knew they could not be required to pay.”

When the new administration took office in 2017, a window of opportunity opened to reverse Obama’s giveaways to Big Labor. In 2017, the Foundation formally brought the illegal-dues skim scheme to the attention of the Trump Administration.

“This long-overdue rule is another important step forward in protecting the rights of homecare workers from greedy union bosses,” added Semmens. “While the rule will still need to be robustly enforced and Foundation staff attorneys are already preparing to do just that, this decision by the Department of Health and Human Services is encouraging.”